A Perfect Cup of Espresso 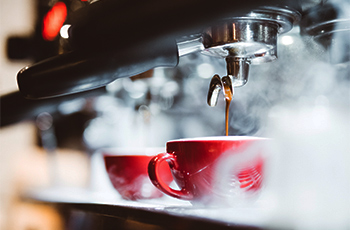 Look into a small, elegant cup of espresso coffee and examine carefully the top layer of foam, known to aficionados as crema. Made of tiny gas bubbles trapped in a liquid film, the foam seals the coffee's intense aromas and flavors and locks in heat. A good crema depends on the quality of the coffee and on the skill with which it is prepared. In a perfect espresso it is velvety, with a warm and characteristic hazel-brown or “tiger-skin” color. It is also persistent, lasting as long as the drink, and with sufficient body to support the weight of granulated sugar for a few seconds. Perfect espresso is the ultimate coffee. It ranks with fine wine for the complexity of its chemistry. Unlike wine, however, it does not improve with age. "Espresso" means prepared on the spur of the moment, and it has become the trademark of rich, intense coffee that must also be consumed at once. Its taste is so dense, though, that it can remain in the mouth for up to half an hour after drinking.

For decades, making espresso was either an art or a lottery. The artists were trained baristas, skilled operators who worked big espresso machines in the coffee bars of Europe. For amateurs trying to make their own espresso it was more a matter of luck, the occasional success a reminder of the reason for the quest. In the early 1990s, only one household in every five then owning an espresso machine used it regularly, because the results were so unreliable.

Today, however, perfect espresso can be found almost anywhere. It can even be made at home thanks to clever new machines that produce consistently good coffee with a minimum of fuss from neatly-packaged individual portions. Among the most influential pioneers have been illycaffe, an Italian family firm based in Trieste, and Nespresso, a division of Nestlé, a Swiss food giant. Nespresso has combined simple-to-use espresso machines with clever marketing to transform consumption at home. Greater reliability has made espresso one of the fastest-growing segments of the otherwise troubled world coffee market.

The Bean Before Steam

By the middle of the 19th century, coffee was well established in Europe as an important trade commodity. Despite growth in the market, however, there had for centuries been little change in the way that coffee was made—either by the so-called Turkish method or by infusion. In both preparations, roasted coffee beans are first ground and then placed in water. The Turkish method requires that the water be boiled three times before the grounds are allowed to settle and the drink is poured. Infusion is simpler—ground coffee is steeped for a few minutes in boiled water and the resulting liquid is then strained before serving.

These methods produced acceptable coffee, but each had serious drawbacks. Multiple boilings replaced the Turkish coffee's delicate flavors with a strong, astringent drink that was routinely sweetened and often further flavored with cardamom. Steeping, on the other hand, was too feeble to extract more than around 20% of the oils and volatile substances that give coffee its distinctive aroma and flavor.

Late in the 19th century, a new method of preparation, known as percolation, offered an improvement and laid the foundations for the espresso revolution that began around 1900. Percolation involved passing boiling or near-boiling water through ground coffee, using either gravity or the light pressure created by steam.

More important as a technological breakthrough was the mocha method. In this, water is boiled in a lower chamber and forced by steam pressure through a metal filter containing the ground coffee into an upper chamber from which it can be served. The contact between the coffee and the water is relatively brief, lasting around a minute. This produces coffee that is strong and sometimes sufficiently bitter that it needs sweetening.

Espresso coffee also relies on pressure, but whereas a mocha pot produces only one atmosphere of pressure, espresso machines require at least nine and ideally ten. Drunk immediately, espresso transcends other coffees thanks to the greater extraction of essential coffee aromas and flavors. The first recognizable espresso machine was exhibited at the Paris fair of 1855. However, it is generally accepted that the inventor of the modern espresso machine was Luigi Bezzerra, an Italian entrepreneur who began commercial manufacture of espresso machines in 1901.

His were cumbersome beasts that relied on steam to create the high pressure required, and they demanded skilled operators to control a series of taps. But they were a hit in bars and brasseries, and they changed Italian coffee-drinking habits for good. Espresso takes a mere 2% of the world market for roasted coffee, but it accounts for half the Italian market.

Others soon followed Bezzerra into production, and some of the newcomers made important innovations. In 1933, Francesco Illy founded illycaffe in Trieste and two years later produced the “Illetta”, the first machine to measure the quantity of water automatically, and the first to use compressed air rather than steam to create pressure. In 1945, a new machine made by Gaggia, another Italian firm, greatly simplified the overall design, introducing a spring-loaded lever to drive a piston and compress the water.

These elegant machines were much easier to use than their predecessors and some are still in use today, especially in southern Italy. A few connoisseurs insist that they are superior to rivals, and it is true that in the right hands they can produce a perfectly balanced coffee.

A further burst of innovation came in 1961 when Ernesto Valente, yet another pioneering Italian, set out to re-think the design of the espresso machine from first principles. He wanted to replace the spring of the lever machine with an electric-powered rotating pump, but no pump could handle hot water. So Valente decided to compress cold water, which would then pass across a heat exchanger before reaching the ground coffee at the optimum temperature of 90°C. His Faema E61 machine was revolutionary, and the main elements of its design define most espresso machines today.

It takes roughly 50 coffee beans to make a single cup of espresso. After roasting and grinding, the coffee weighs around 6.5 grams. A cup of espresso will contain a rich variety of solids, though in minute quantities, whereas a cup of filter coffee contains almost none. But then espresso coffee is full of chemical and olfactory surprises.

A single coffee bean may contain over 1,200 chemical substances

One is that it contains less caffeine than almost any other form of prepared coffee. True espresso must be made entirely from arabica beans, which have half the caffeine of the alternative robusta variety. In the making of a perfect espresso, too, the hot water and the coffee combine only briefly—ideally, for 30 seconds. That limits the amount of caffeine that can pass into the water. By contrast, steeped or percolated coffee made with robusta beans is very strong in caffeine.

A second surprise is the sheer variety of chemical substances inside a single roasted coffee bean. Scientists reckon there are more than 1,200 of them, of which perhaps 700-800 are volatile compounds responsible for aroma. The espresso process releases more volatiles than other methods of preparation.

The aroma is a vital part of perfect espresso. "Roughly 70% of what we perceive is aroma," says Furio Suggi Liverani, director of research at illycaffe, “while the remaining 30% is received by taste receptors on the tongue.” Perfect coffee requires excellent preparation, but it also requires top-quality beans. If just one of the 50 is a dud, then that cup will be perceptibly less than perfect. The roasting must be even, and the grinding process must be finely calibrated so that the resulting coffee allows smooth passage of the hot water that extracts the flavor.

It has taken manufacturers decades to sort out each element in this exacting process. The biggest challenge remains avoiding dud beans. It is quite normal for a fair quality batch of green coffee (that is, coffee before roasting) to be 1-2% defective. But if two beans in 100 are duds, the chances of a bad espresso are unacceptably high. Few plantations, however, can afford the sophisticated equipment needed to create defect-free supplies. Instead, coffee companies such as illycaffe and Hausbrandt, a rival based in Treviso near Venice, have developed electronic detection systems. These use light waves to scan individual green beans, which are rejected by a puff of air if they show up as defective. Illycaffe's scanners can assess 400 beans every second.

The final hurdle overcome by the manufacturers was the packaging and storage of espresso. Like all coffee, espresso quickly deteriorates in air. Leading companies began to experiment with making air-tight individual doses. A system developed by illycaffe uses paper pods to hold a single dose of coffee. The pods are then packed under pressure using carbon dioxide to seal out damaging oxygen. So technically demanding is the sealing process that the company had to create its own welding expertise—no supplier was up to the task.

By contrast, Nespresso's doses are neat aluminum capsules, also kept under pressure using carbon dioxide. When inserted into the machine, the punctured capsule acts as a membrane, allowing water to flow evenly through. More ingenious still, the capsule itself has been designed to regulate the pressure pushing the water.

In the past two or three years, the market for espresso coffee has been growing strongly: by more than 10% a year, Nespresso reckons. But “household penetration is low,” says Daniel Lalonde, its commercial director, “so there is enormous future potential.” For instance, 70% of French people drink espresso every day, yet only 10% of French homes boast an espresso machine. Penetration in big markets such as America and Britain is far less, at around 1%.

The context for the growth of espresso is a big shift in the coffee market away from cheap coffee towards specialty products. Amid tales of woe from growers in developing countries, overall coffee prices have declined to record lows during 2001. Observers say a glut of cheap robusta coffee, much of it from Vietnam, which has quickly emerged as a big producer, has been largely to blame.

The quality end of the market, however, has continued to thrive. Big buyers woo individual coffee growers, paying above-market prices to encourage quality and reliability of supply. They can afford this because margins on drinks like espresso are high. A single capsule of Nespresso contains some six grams of coffee and retails for roughly 28 cents, equivalent to around $46 per kilo. A kilo of fair-quality green coffee costs less than $1.

So where to go for guaranteed espresso perfection? Having sampled coffee all over Europe, this correspondent finally found perfection where it might be expected to reside: in the Italian home of espresso. In the heart of old Trieste is the Caffe illy, a coffee bar developed as a laboratory. The atmosphere is cosmopolitan, and the espresso is as near perfect as you can hope to find.